An Interview With Marcy Cook

In addition to being Women’s History Month, March is also #TransComicMonth.  We interviewed Marcy Cook, creator of the hashtag. 1. Where are you from? I’m originally from Europe, though I now live in Western Canada, the land of the hot PM and professional panda-petter Justin Trudeau. Canada is little understood in Europe, so it was […]

In addition to being Women’s History Month, March is also #TransComicMonth.  We interviewed Marcy Cook, creator of the hashtag.

1. Where are you from?
I’m originally from Europe, though I now live in Western Canada, the land of the hot PM and professional panda-petter Justin Trudeau. Canada is little understood in Europe, so it was in interesting move to many of my friends. They assumed I’d be living in ice and snow constantly. In fact it’s warm, lots of space trees and fresh air. Canada offered me more freedom than Europe could and now I wouldn’t go back.

I’m a professional writer, amateur artist, and diversity advisor. None of which are big money gigs unless you get very lucky so I have a day job topay the bills. Professional cat wrangler! It’s a niche market.

3. Where would people know you from?
I write on various topics at The Mary Sue, I also write for the comic book website Panels. I have a comic book story out right now, part one was in issue #7 of Rosy Press ‘Fresh Romance’ and part two will be in issue #8. I’ve also written for Women Writing on Comics and Book Riot. I’m always surprised when someone says they’ve read something of mine, it’s still magical to me.

4. How did you come to comics
I’ve read comics since I could read, The Eagle and 2000AD were first, then super comics like Excalibur and manga such as Akira in the early 1990s. These days I pick and choose a lot more than I used to, at least for my personal purchases. Professionally I read whatever so I can deconstruct and both learn from comics and critique it.

4a. Do you have a favorite:

i. Comic Book
If forced to choose I’d go for the current run of Squirrel Girl from Marvel. I love the idea that a super hero tries to solve things by talking before she starts fighting. Squirrel Girl is irreverent and funny but the concept of emotional connection and understanding is at its heart. I hope it doesn’t lose that as it goes forward.

ii. Comic Book Movie
The best super hero movie is by far Winter Soldier, but it’s not my favourite. That dubious honour goes to Guardians of the Galaxy, even though that movie has huge problems. I have a soft spot for Sci-Fi, what can I say. As for TV I’d recommend Jessica Jones and Agent Carter. 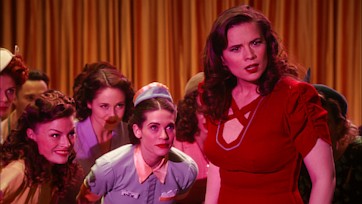 iii. Character
I don’t really have a favourite character, if I did it would change on a near daily basis depending on what I was reading and my mood. I’m enjoying Black Canary a lot and also Hellcat. I’m going to force myself to make a choice and right now I’d say Batgirl is my favourite character. I like the feel of the book and what they are trying to achieve with it – plus the team behind Batgirl is so ridiculously nice when you chat to them. That influences my choice a bit!

iv. What Are You Reading?
A long list of titles that are for professional reading. On the personal side I’ve actually stopped buying monthly comics recently. Both DC and Marvel have moved a bit away from supporting diversity and women so I’ve decided to put my pull list on hold. I’m now waiting for the trades, a great recent trade for is Black Canary Vol 1 from DC Comics.

5. What is #TransComicMonth?
It’s highlighting trans comic book characters and trans creators; promoting trans inclusion and representation in comic books. A media that very much ignores and maligns trans people.

How long have you been planning for  #TransComicsMonth?”

It wasn’t planned, it just organically happened. Luckily it took off.

What was the impetus for starting the hashtag?

It was inspired by Black Comics Month which was created by @MizCaramelVixen. That idea inspired me to start a movement for trans people in comics.

What would you like to see the hashtag achieve, other than the general goal of improved awareness for trans issues?

To have made someone think, consider including trans creators behind the scenes in comics. Also to have people consider writing trans characters carefully with discussion from trans people. I’d also love Marvel to notice and phone me and ask me to pitch them a new take on Excalibur. OK that’s never going to happen but hey I can dream!

Why March? How does this relate to the intersectional difficulties that the trans movement and the feminist movement sometimes experience?

Trans Comic Book Month follows on from Black Comics Month, and black trans women are the most oppressed within the entire LGBTQ spectrum. They need a lot more protection and support from the rest of LGBTQ than they currently get. It would be good to promote trans PoC as much as possible during the month. March also contains International Women’s Day, which I think is a great time to promote women led comics and to try and bring in new women readers of comic books. The politics of feminism and transgender people overlap and are generally positive. It’s sad that a lunatic fringe exists within feminism, called trans exclusionary radical feminists (TERF), it’s a hate group that persecutes trans women. Luckily they are a tiny minority within feminism and shouldn’t taint the wider support that trans women get from feminists.

What has the overall response been so far? Has it been
surprising?

The response has been very positive and to me this has been the most surprising thing. I’ve not had anyone yell at me about this yet. People online yell at me for all sorts of reasons normally, I’m either doing something right with this or I’ve gone very wrong! The future will no doubt arrive at some point and tell me. I’ve spoken to someone at Marvel about a trans character they haven’t announced publicly yet, asking if they’ll make the announcement during trans comic book month. Yet to get a final answer though so I can’t say anything about that yet.

What happens during the rest of the year?

Hopefully creators and publishers will stop with transphobic nonsense like Airboy and Justice League 3000. I’ll continue talking about comic book diversity and working behind the scenes with comic book creators on how to do trans comic book characters in a positive way.

What resources would you point people to if they want to know more
about trans issues and trans comics?

I wrote about how to create a positive trans comic book character over here. As for trans issues, well I’d hesitate to point anyone at a single site. The best way to learn is to do your research (wiki and so on), read a variety of trans people online and talk to trans people. That way you’ll start to understand trans topics a lot better.

7. Imagine you can pitch one comic-related property to a broadcast
company (network, cable, streaming or movie company)? What do you pitch?

If I had to pick one I’d go for one I know would be successful, Gotham Academy from DC Comics. It has everything a TV series needs, a contained location, new and known characters in an established property. I’m not sure why Gotham Academy isn’t already a TV show really, it would be wildly successful.

It’s by our senior sound editor, Steve Jacoby, who has does this kind of work for kings, queens and galactic emperors. You can find All Comics Considered ALMOST every THURSDAY:

That’s where our archive of awesome lives. Please leave us a review. Give us stars, give us reviews, share us, reblog us and retweet us!

You can register all complaints or corrections with: Lockjaw@allcomicsconsidered.com

If you want to email anyone on staff, you can email us at our first name @allcomicsconsidered.com